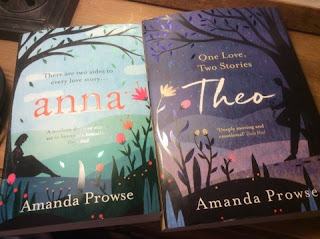 Anna Cole  - grew up poor, but her mother's love made her feel rich every day. Then her mothers died, and Anna was sent to a care home. As a teenager, Anna vowed that one day, she would have children of her own and create the happy, noisy family life she always craved.

Theo Montgomery  - Theo has kind eyes, but a sad past. His family were rich where he had all the toys and trinkets money could buy. But his childhood was full of neglect and he was bullied at school. Now he is an adult Theo can't imagine bringing up a child into this cruel world, but he does want a soulmate.. Someone who understands him. Someone who will love him unconditionally.

Then, one day, Theo meets Anna Cole in a lift. Theo and Anna are two damaged souls, from two different worlds. Is their love for each other enough to let go of the pain of their pasts? Or will Anna and Theo break each other's hearts?

My January reads were two books Anna & Theo by Amanda Prowse. It is no secret that for many years now, that I have regarded Amanda Prowse as one of my favourite authors.  I love the fact that she writes about real life subjects as though she has lived them but, as with most authors I find I like some of her work better than others but Anna and Theo I think as one love in two stories works brilliantly. But if I had to choose I would have to agree with Jo from Through the Keyhole blog and say that out of the two Theo was my favourite. Not least because there is a cameo role for a character named Mitzi.  Myself and Amanda do converse from time to time through instagram and facebook and she comes across a lovely down to earth lady.  I did tag her into a comment about my namesake and she did leave a comment to say she wondered what I would think of my name being used in one of her books.  Well it was a bit of shock when I saw my name on the page but then I roared with laughter. That's the only problem with having an unusual name. You spend most of your life like TIGGER thinking you're the only one, but it also means that people will latch onto the name store it in their memory and use it when you least expect it.

You could read each book as a stand alone novel and never read the second, but then you would only get to know one side of the story.  You definitely need to read Anna first followed by Theo or there will be elements of do they get their happy ever after that will be revealed and spoil your reading pleasure.   I guess what you really want to know is,  does Anna get the happy family she so desperately craves and does Theo find his soulmate and can he put his past behind him to enable himself to move forward and embrace family life.

Now there is a third novel in this series How to fall in love again - Kitty's story where in his twilight years Theo meets up with an old flame but I am going to hang fire and savour these two stories for a little longer before I read this one just yet.

For my February read I have just started the The Clockmaker's Daughter by Kate Morton which I think is going to take me most of the  month to read as it is 592 pages, but at least by then this little dormouse will be coming out of hibernation as we move into Spring and hopefully some warmer weather wouldn't that be lovely.