After the end - Claire Macintosh 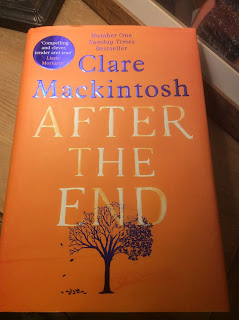 Max & Pip are the strongest couple you know. Only now they're facing the most important decision of their lives - and they don't agree.

As the consequences of an impossible choice threaten to devastate them both, nothing will ever be the same again.

But anything can happen


Max & Pip Adams are one of the strongest couples they know, that is until their son Dylan is diagnosed with a life limiting illness.   He has spent months in PICU after surgery and treatment for a brain tumour.  He has seizures and is unlikely to ever walk and has considerable brain damage and no other treatments available to him.   Doctors have advised Max & Pip that Dylan should be given best supportive care and allowed to die and whilst Pip believes that her son has been through enough and agrees with the hospital, Max does not and wishes his son to travel to the States for Proton Beam Therapy.  Proton Beam Therapy is not the usual treatment for this type of brain tumour and whilst may prolong his life ultimately there is no cure. With the parents unable to agree the hospital goes to court for a definitive decision.   There will be no winner in this case and its whether the decision will bring them closer together or tear them apart.


I have read all of Claire Macintosh's novels and loved them all.  Her latest novel is split into three sections. The first section begins with Max & Pip attending court whilst taking you through their journey to this point, about their lives prior to Dylan becoming ill. Allowing you to think about how you would make a decision like this about a child you love.

Section two was after the court case and at first I found it a  little confusing at first as I couldn't quite understand the direction it was taking.   I then realised that you were being given two scenario's the first should the decision be made to allow Dylan to die and how this would impact on Max & Pips relationship. The second being how their lives would unfold if Dylan were to receive Proton Beam Therapy and the impact of having a disabled child and the care he would need knowing that ultimately you would still loose him at some point in the future.

The third section takes you back to learning the decision of the court and how this will change the lives of Max & Pip forever and ultimately what happens to them both after loosing their son.

Like all Clare Macintosh novels it is very well written and each chapter is told from the perspective of one of the main characters of which there are three  over a period of 8 years. |Its no only thought provoking but also takes you on a very emotional journey and may have you reaching for the tissues. If my last book took me six weeks to complete this one took me six days and I would highly recommend it.

Email ThisBlogThis!Share to TwitterShare to FacebookShare to Pinterest
Labels: Off the bookshelf

Thank you for stopping by today I hope you enjoyed your cuppa and may be a biscuit or slice of cake too. Please leave a comment, I do read every single one and will reply to you all as soon as possible.