Come into my garden - The old barn door 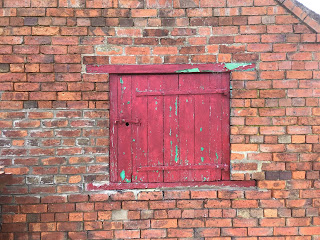 Its not really been the weather to get out and sort things out in the garden but this wall belongs to the woodshed and is in desperate need of re-pointing another job for over the summer. But as you can see it has this funny little door.  We're not quite sure why this is there.  I suppose it wasn't always a woodshed and chances are with it being an old farm house that there may even have been a pig or two living in there and perhaps that's where they put the feed through who knows. 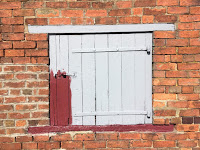 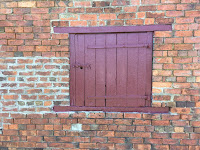 It was in need of some tender loving care, but at the same time I didn't want to take away the fact that it is an old door what ever its use was. Back in May I stripped all the old peeling paint off and gave it a rub down and three coats of external undercoat and already it was looking so much better. And look at it now.  It certainly looks a lot better than it did but still with its old world charm.  The bearded one wasn't quite so convinced and at first wondered why I was going to so much trouble, but of course he didn't know about my cunning plan. 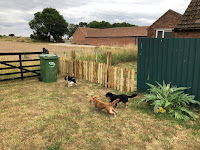 This little space at the end of the outbuildings was really just a dead space. In fact it was where we have been storing the bins for the last two years and as you can see right at the end of it is the ginormous oil tank.

It was also the one place the furry paws would rush off to but not anymore as its now fenced off which totally scuppered the three of them from disappearing around the side where we couldn't see them.

I discovered a few weeks ago that this area is actually quite a little sun trap, yes this was before summer decided to take a vacation and send the rain, wind & hale to us instead.  I have been trying to find myself a little bolt hole,  somewhere where I can hide away from the world with my crochet, knitting or even my latest read and a nice pot of tea.  And I think I may well of found it.  I started plotting and planning and I did think I would have to work hard to convince the bearded one.  I was fully expecting him to say with the size of this garden this is the one space you want to do something with, and the answer to this would of been YES.... 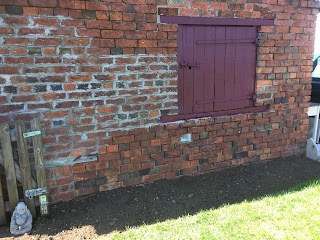 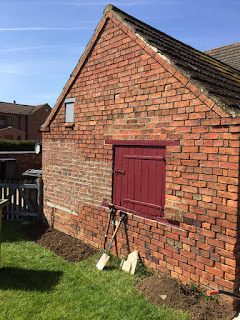 And of course once I got started there was just no stopping me with new beds dug. We have a piece of trellis sitting in the wood shed and I'm thinking that it would look very nice on the narley old wall with maybe a climbing rose or honeysuckle growing up it, any other ideas gratefully received. 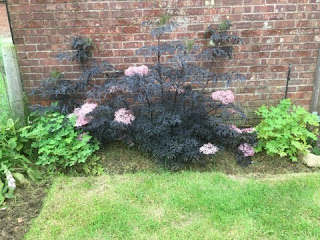 Planting has already started with some Dicentra or Bleeding Hearts to you and me, accompanied by Sambucas Black Lace which is part of the Elderberry family.  It was the tiniest weediest looking thing, as I am a bit of a plant it and it will either thrive or it will die kind of gardener, but to my amazement it has really put on a growth spurt this year and is already reaching just under the garage window.  I planted it with the intention that it will fill out and be as tall if not taller than the garage window to hide what is essentially a bit of an eye sore. 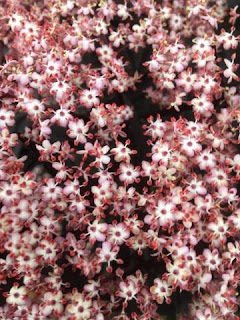 It has just come into flower and the smell is just exquisite.  I believe you can also make cordial from the flowers but I think it needs a few more years of growth to have enough flowers to do that. 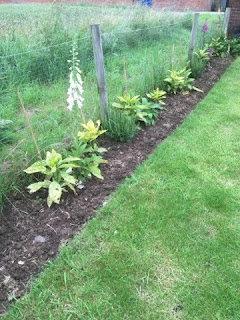 D had bought some Laurel to go along the fence as he didn't want something too tall that would obscure the view of the fields around us, and we can keep these as a reasonable height, although I think it may take a while for them to need any cutting back as they are only around 12" tall at the moment and I'm not sure they are that fast growing. 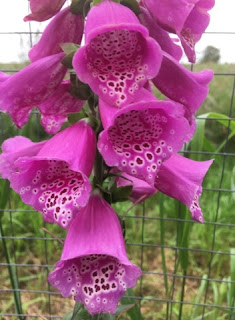 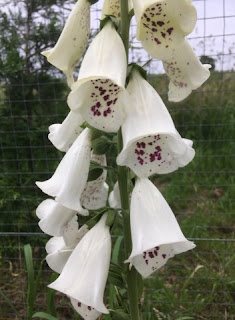 Foxgloves are also one of my favourites, but I do have to watch the furry paws don't take a nibble as this could make them very poorly but so far they've paid them no attention.  It was our Monty, who passed away last year,  who was the plant nibbler. 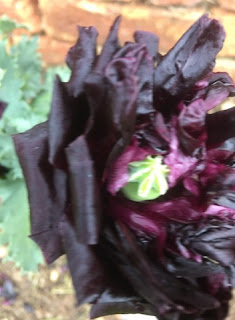 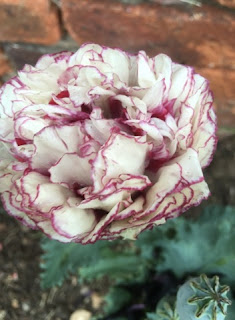 I found this variety of poppy at the Gardeners World Live show that I went to last month.  It's called Black Beauty and is the most gorgeous deep purple, its about ready to go to seed and I will leave it to sprinkle its seeds in the hope that more will return next year.  I was quite surprised as its flowers started to open as I then realised there were two different varieties within the same pot, bonus! I have no idea what the cream/pink one is called.

When we moved from our cottage it was just at the point just before the  poppies were due to appear and I thought that would be it we wouldn't have the self seeders here at the farm house.  To my surprise one had self seeded itself in a pot that we bought with us and I managed to move it into the garden and it took and then self seeded more along the border.  They weren't really in the right place as they were over crowding other plants so once they had flowered I collected all the seed heads which have now dried out fully and I have an abundant amount of seed heads and I can hear the seeds rattling around in side.  I am waiting for the wall to be re-pointed in this part of the garden which is due to happen in August and then I will sprinkle my seeds in the hope that they will take and will be a wash with beautiful poppies again next year.    This area is very much a WIP and over the coming months there will be lots of additions to make it into that little space I am craving for so I will keep you posted from time to time as to how it is coming along.  There are times when I don't think much has changed in the garden but then I look back on photographs from when we first moved here and I am pleasantly surprised how much it has come on in the two years we have been living here, not as quick as some  but I suppose Rome was not built in a day.

Email ThisBlogThis!Share to TwitterShare to FacebookShare to Pinterest
Labels: Come into my garden

Thank you for stopping by today I hope you enjoyed your cuppa and may be a biscuit or slice of cake too. Please leave a comment, I do read every single one and will reply to you all as soon as possible.